36 Comments
By Alyssa Alyssa, The Prisoner of Azkaban

The Prisoner of Azkaban, Chapter 5: Chocolate Is the Cure for Everything

Oh, you guys. YOU GUYS. My love for this chapter almost has no words. Notice I said almost, because I’m about to sling a bunch of words at you that are all about my love for this chapter. The reason I love it so much comes in the form of a certain scruffy, unassuming new Defense Against the Dark Arts professor. Read on!

We begin with breakfast at the Leaky Cauldron and preparations for the journey to Hogwarts (Hogwarts, Hogwarts, Hoggy Warty Hogwarts YAY I’M SO EXCITED). Before the kids board the train for another year at my favorite magical locale, Arthur Weasley takes Harry aside to tell him that Sirius Black escaped Azkaban for the sole purpose of hunting Harry down, which Harry admits he already knows because of eavesdropping. Arthur then very ominously warns Harry not to go looking for Black. Harry doesn’t understand why Arthur thinks he would actively look for someone who wants to kill him. Obviously, Arthur knows Harry better than Harry knows himself.

On the train, the Trio go in search of an empty compartment and find all of them full except for the one at the very end. I’ll let Rowling introduce you to its sole occupant:

The stranger was wearing an extremely shabby set of wizard’s robes that had been darned in several places. He looked ill and exhausted. Though quite young, his light brown hair was flecked with grey.

…and he’s fast asleep. Hermione, ever the observant one, points out that his luggage reads Professor R. J. Lupin, so they have a name and an occupation to attach to the mysterious stranger. Hermione also points out that the Defense Against the Dark Arts position is the only one that’s vacant. DUN DUN DUNNN. It’s time to legitimately start worrying about this dude, considering the position’s previous two occupants.

This is how I imagined Lupin. 😉

Harry tells Ron and Hermione about Sirius Black, and the trio is reaching their freak-out boiling point when Harry’s Sneakoscope suddenly goes off. Ron hides it in a pair of Uncle Vernon’s old socks and sticks it in Harry’s trunk, and not much happens beyond that, but I think it’s safe to say the Sneakoscope is one of Rowling’s important little clues. At this point, it would be natural to suspect that Lupin is untrustworthy, and that was probably Rowling’s intent, but the kids aren’t concerned since they think the Sneakoscope is malfunctioning. Which is actually weird because you’d think they’d be overreacting like they do about everything else. For once, they decide to give something the benefit of the doubt.

The conversation turns to Hogsmeade, which rivals Hogwarts for my favorite magical locale. As much as I love Hogwarts, reading about Hogsmeade for the first time was a fantastic revelation. The realization that the kids weren’t all alone in a giant castle out in the Scottish highlands, that there was an entire wizarding village next to them, opened up a whole new realm of magical excitement. Hogsmeade seemed filled with possibilities and, more importantly, sweets!

Hermione goes on about the history of Hogsmeade, which is actually pretty interesting, while Ron just keeps listing off sweets:

Pepper Imps — they make you smoke at the mouth — and great fat Chocoballs full of strawberry mousse and clotted cream, and really excellent sugar quills, which you can suck in class and just look like you’re thinking what to write next — and massive sherbet balls that make you levitate a few inches off the ground while you’re sucking them.

I would kill for one of those Chocoballs…

Next, Harry is a buzzkill. He tells Ron and Hermione that he can’t go to Hogsmeade because the Dursleys didn’t sign his release form. Cue my heart shattering because if Harry can’t go, then it means I can’t go. All of a sudden this forced perspective thing really sucks.

The food cart comes around, and the kids are settled in while Professor Lupin sleeps, and it’s all very cozy and familiar until the train suddenly stops. The lights go out, and there’s lots of humorous fumbling around as Neville and Ginny make their way to the Trio’s compartment and everybody bumps into each other and almost sits on each other. Out of the darkness, an unfamiliar voice snaps, “Quiet!” and Lupin conjures fire in his hand, which is the first sign that he’s a badass. He doesn’t even need a wand.

We can’t start a new school year without something to put Harry out of sorts, but this year it’s serious business. The compartment door slides open and a literal nightmare steps through.

This is where we’re introduced to the lovely creatures known as dementors. This school year really starts off with no holds barred in the realm of things that could potentially fuck Harry’s world up. The dementor is described as a tall, black-robed figure with slimy dead hands. Harry feels intense cold and a sensation of being dragged downward. He hears someone screaming, and then he passes out.

When Harry comes to, Lupin officially transitions from a character we should be wary of to a character who gives the kids chocolate as medicine. That’s right, Lupin knows: chocolate is the answer to everything. The other kids talk about feeling cold and hopeless, but Harry is embarrassed because he’s the only one who fainted. Harry’s special, you guys! Didn’t you know? We find out later that there’s a reason for his severe reaction, but I won’t get into that now. Hermione recounts the events that followed Harry’s fainting, and we get our first mention of a Patronus, although we don’t have a name for it yet. Hermione describes it as a silvery substance that emitted from Lupin’s wand to dispel the dementor.

One thing that struck me during this re-read is how layered Lupin already is in this early chapter. Within the space of a few pages, we know that he’s young yet worn down and ill, suggesting Hogwarts might be a sort of refuge for him; he’s suspicious yet kind; and he’s a competent wizard who is capable of protecting his students. Once again, Rowling demonstrates her aptitude for establishing interesting characters without revealing too much right away. 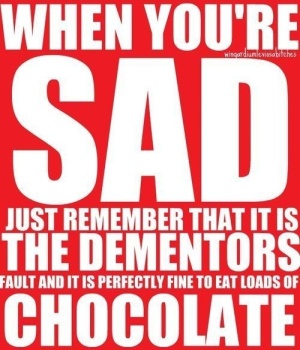 The lack of an apostrophe on this kills me, but I love it nonetheless.

When we arrive at Hogwarts, Draco is his usual jerk-face self, laughing at Harry for fainting, but Lupin intervenes. McGonagall takes Harry aside and seems overly concerned for his well-being after the dementor situation. Madame Pomfrey is there too, and she’s got nothin’ but approval for Lupin’s swift administration of chocolate. Important to note is that McGonagall also pulls Hermione aside to discuss her schedule, which is going to be a pretty huge deal later on. We learn that Dumbledore has stationed the hellish dementors outside the castle to protect from the possibility of Sirius Black attempting to breach Hogwarts, but we still don’t know why one drifted into Harry’s train compartment. What we do know is that they serve as guards at Azkaban, draining hope from all of the criminals who are imprisoned there… and now they’re at Hogwarts. Yikes.

Harry climbed the spiral stair with no thought in his head except how glad he was to be back. They reached their familiar, circular dormitory with its five four-poster beds, and Harry, looking around, felt he was home at last.

36 thoughts on “The Prisoner of Azkaban, Chapter 5: Chocolate Is the Cure for Everything”